The technical recruitment process is hard enough as it is between the screening and the interviewing, the coding and the negotiation. But you can’t do anything without attracting candidates to the top of your recruitment funnel and for that, you need an amazing job ad.

It’s important to make a pitch that no developer would ever want to say no to. Your ad serves an important function beyond a simple explanation of the position you are trying to fill. It should be a reflection of you, your company, and the position, perfectly targeted to entice the right people while filtering out the wrong people.

But it isn’t always straightforward what you should do. To help, we’ve compiled a list of the most important tips to making a job ad that no developer will be able to resist.

Don’t lie or oversell the job in your job ad

Think of the tactics that unscrupulous used car salespeople employ. They take a lemon and then slap a new coat of paint on the outside. Maybe they’ll cover up crash damage with some putty and change the mats to cover up water damage.

After the deception is complete, they will simply pawn off the car to an unsuspecting soul, finalize the deal and run away. By the time the buyer realizes that something is wrong with the car that they’ve bought, the deal will have been finalized and the customer won’t be able to do anything about it. By then, the dealer will be moving on to the next unsuspecting customer and the seller will be left with a hunk of junk.

Even if this was somehow a good way to sell cars (and it isn’t), hiring a software developer is a completely different ball game. If you land a developer under false pretenses, you won’t simply be able to run away after signing the contract. If they don’t realize that the position is not how is been advertised in the interview process, they will surely notice in the first few weeks of the job.

Given how much demand there currently is for developers, they will probably leave. This means that you will have to invest in another hiring process and your displeased former employee will tell anybody that they know in the industry that you are deceptive. Good luck hiring another quality developer after that.

You may get fewer candidates by being truthful but you will get better candidates. This will actually help your process because you will need to invest less time in screening the people in your recruitment funnel since there will be fewer of them.

Developers don’t all have a monolithic skill-set. Instead, the field of software development contains a wide spectrum of different skills and technologies. Not only that, developers tend to be interested in just one facet of that wide spectrum of skills. This is why it’s important to include in your offer the exact languages, technologies, frameworks, databases, really whatever you use to build amazing software.

Just take this ad for a QA Developer:

As you can see, there is a clear explanation of which technologies they will be using in the position. You could see somebody familiar with .NET and Visual Studio being interested in this job while somebody who is interested and Python and Hadoop will look elsewhere.

Being explicit with technical information doesn’t just serve to weed out people who you don’t want. The whole point of a job ad is to pique the interest of the right kind of developer. By showing off a unique tool stack, you’re going to get the right people interested in your position.

Provide details about how you work and the tools you use

The Seven Dwarfs, in other words, the guys who live with Snow White, are all miners. But do you think that every miner does the same work? Certainly not. Anyone wanting to work with them would probably have a bunch of questions like do they use pickaxes or not or whether they just mine diamonds or do they also look for other precious stones?

A developer is not that different from a miner joining the Seven Dwarfs’ team. They want to know exactly what their work environment is going to be like. For instance, do they use Agile or Scrum or Kanban? Does the teamwork 12 hours a day to finish projects or do they go home at a reasonable hour? What are the projects that they work on? For that matter what kind of tools do you use?

As you can see with our QA Developer offer, full details are given about the position: Along with work expectations like the expected length of the workweek and the possibility of remote work, the offer breaks down what tasks the job will involve and how much time they will be devoting to these tasks.

So this job would be great for somebody who is happy to do a bit of client support and bug fixing while it will deflect people who only want to work on new features.

Always show your salary range for the position

A common practice in employment used to be to hold your cards close to your chest as possible. You wouldn’t want to give away your salary range because then you might be able to get a better deal at the end of the negotiating process.

This approach just flat does not work in technical recruitment. There are a few reasons for this.

The thing is 59% of developers (source) want to know about compensation details when applying for a job. And it isn’t just an issue of underpaying developers. On top of the concerns listed above, there are simply software engineers out there who you cannot afford. You do not want to spend a long recruitment process only to give an offer to a developer who will not accept the rate that you’re willing to give.

You don’t need to post the exact number but always post a range. This is the approach taken in our QA Developer offer, 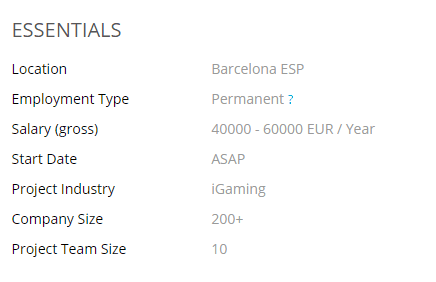 Including a salary range in your offer will entice the people would you can attract and it will put off the time-wasters.

Say how you develop your developers

If you get a developer who’s no longer interested in learning new things, you’ve got a bad developer. The developers that you should be bending over backward to attract are the ones who are constantly developing themselves whether it be their technical skills or business skills. As a result, is important to advertise exactly how you can help them become better professionals and better people.

This means explaining whether you go to conferences, what sort of training you do, what kinds of internal competitions you participate in, and just generally how you help out your developers. Casumo puts all of this information into a table:

As you can see, the job ad covers a few different categories including training, conferences, and personal development. A developer who wants to increase their skills will be more likely to take up a job ad that has a training budget.

Say how you work

The days of going to work at 9, hanging your hat on a hat stand, and then work at your desk for eight hours either in an office or a cubicle farm are long gone. While some companies may still work like this, there are as many different work environments as there are days in the year. Different developers prefer different styles of working. Some might find remote work is a big priority. Others might require a shower in the office so that they can jog to work. While some like having no distractions, others want to have a more informal space with games or other perks like a canteen or a game console that they can use to blow off steam.

Your job ad is a great place to both highlights the type of work environment you have and also depending on the platform show some pictures of your workspace so that developers can get an impression for the kind of work you do.

Software Developers, particularly the ones who are most valuable, are probably already working and are probably looking for a number of different jobs at the moment. Instead of demanding that they pick you (nine times out of 10 if you make demands like that they won’t),  the process as easy for them as possible. This means describing exactly what will be expected of them to the process, and what types of tasks they will have to do, and what the expected recruitment schedule will be. That way there will be no surprises.

The job ad is one of the first points of contact that your candidate has with your company. And yet you see too many job ads that look like a stream of consciousness. Without paying any heed to paragraphs, they just consist of a big block of text. Now compare this to the general layout of this job ad, All of the information is there but it is presented in a clear, easy to read format. Any prospective candidate will be able to scan this quickly and find the exact piece of information they need to make the decision as to whether they will apply or not.

What to do now

What are you waiting for? Go and create the perfect job ad. Remember that this is one of the first conversion points in your recruitment funnel. Not only that, it can be great for weeding out the time-wasters and should entice the exact candidate that you are looking for, streamlining your hiring process. So make sure that your job ad is a proper reflection of who you are as a company and what you want in a developer, making for an amazing candidate experience.

Once you have a developer hooked, you can greatly speed up the process of hiring them using a test from DevSkiller. We asked recruiters to give their biggest pains in tech recruitment [EBOOK UPDATE]: How to hack process of recruiting programmers [with a Case Study]